An element is a chemical made of only one type of atom.

A compound is two or more elements that are chemically joined.

Bonding happens because atoms try to achieve the electron configuration of noble gases (full outer shells). As such, atoms that do not have Noble Gas Electron Configurations are highly reactive.

There are three ways for atoms to achieve a full outer shell of electrons:

A charged particle that has lost or gained electrons.

When an atom gains or loses electrons, it forms what is called an ion. An ion is simply the name for a charged atom.

E.g. When a fluorine atom gains 1 electron it forms an ion with a charge of -1

Note: In the above diagrams, all of the electrons are shown, however it is often easier to only draw the valence electrons (electrons in the outer shell).

Note: The noble gases (group 0/group 8) do not form ions as they already have a full outer shell of electrons.
Note: Carbon and silicon in group 4 generally form covalent bonds by sharing electrons (See Covalent Bonding).

The electrostatic forces of attraction which hold positive and negative ions together in an ionic lattice.

These chemical interactions only occur between ions. Since opposite charges attract and like ones repel, the interaction must be between ions that are oppositely charged. Thus, any ionic compound must contain both positively and negatively charged ions.

However, if an oxygen atom reacts with a sodium atom, it can only get 1 electron of the 2 it needs (as sodium ions only have a charge of +1). So the oxygen atom must react with 2 sodium atoms to get 2 electrons. In this case the compound contains 2 sodium ions for every 1 oxygen ion and has the formula Na2O

In addition to gaining or losing electrons to form full outer shells, atoms can share electrons.

The electrostatic forces of attraction between a shared pair of electrons and common nuclei.

Previously, we have looked at examples of atoms of the same element bonding with each other. But, atoms can also form covalent bonds with atoms of different elements.

If one hydrogen atom covalently bonds with one oxygen atom, then the hydrogen atom forms a full outer shell, but the oxygen atom doesn't. An oxyen atom needs two electrons, so tries to share two pairs of electrons. It does this by sharing one pair with each of two hydrogen atoms, as shown below, forming water.

Simple molecules are made up of a few atoms covalently bonded together. The covalent bonds that hold the atoms together are very strong, but the intermolecular forces between molecules are weak. Examples of simple molecules include water and carbon dioxide.

If you want to learn more about simple molecules and giant covalent structures, see Structures and Properties

The electrostatic forces of attraction which hold positive ions and delocalised electrons together in a metallic lattice.

Only elements that are metals (from the left of the periodic table) can be present in metallic bonding. Atoms of metals always lose electrons, so always form positive ions.

Metals can lose their valence electrons (electons is the outer shell) even if there is nothing present to take them away. In this case, delocalised (free) electrons can float about between ions, as shown in the diagram below. 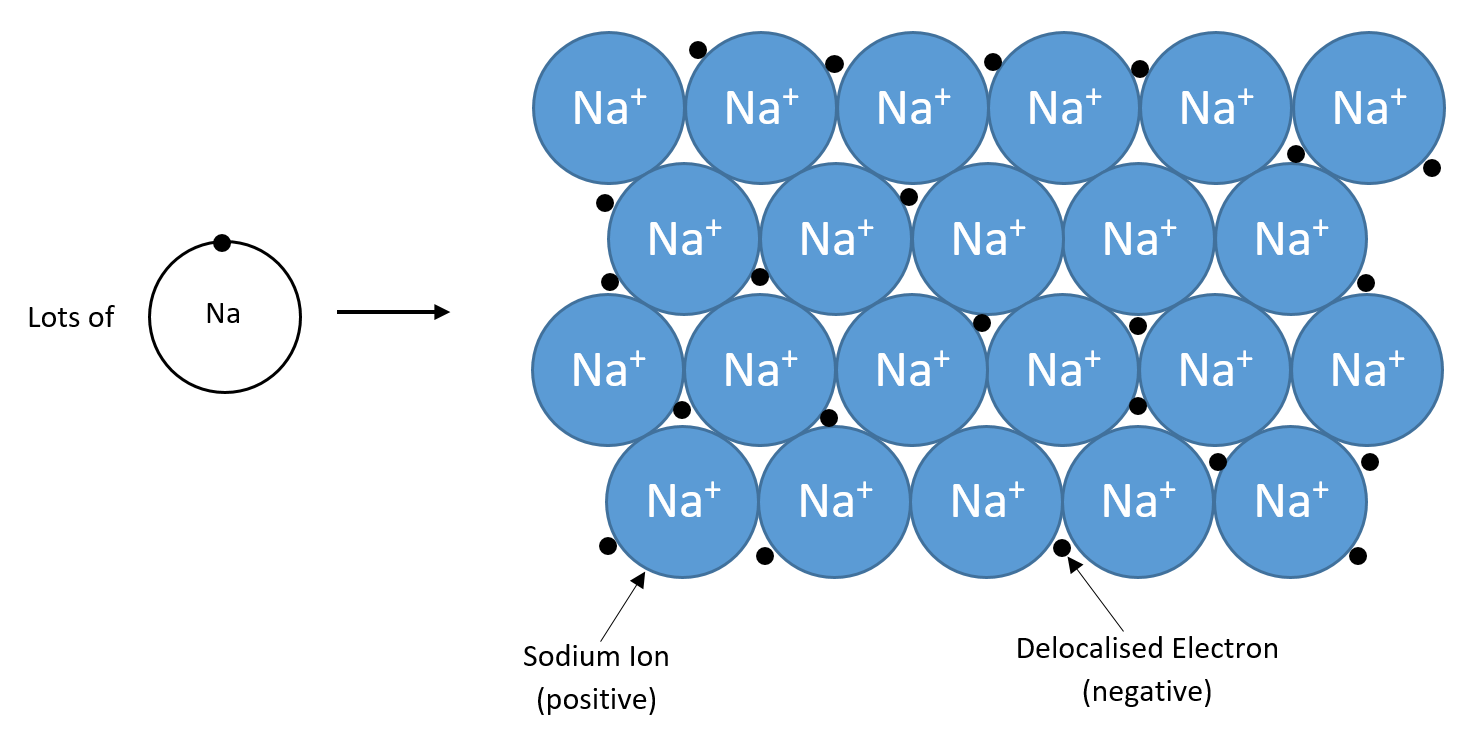 A metallic lattice is similar to an ionic one because it is held together by strong electrostatic forces of attraction, which take a large amount of energy to overcome. However, a metallic lattice is different because the forces act between positive ions and delocalised electrons. The diagram above shows the bonding in sodium. Positive sodium ions are held in place by their attraction to the delocalised (free) electrons.

Back to Chemistry Home